Notes From the Queer Ghetto 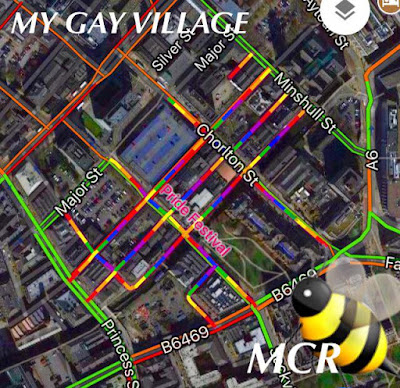 Across the world, "Gay Villages" provide a safe-space for LGBT people who have struggled for many centuries (thanks colonialism)! From San Francisco's Castro District (arguably the first "out" LGBT Quarter) to New York's Christopher Street, these are important historical areas. They should be recognised as such (what's the step down from a UNESCO heritage site?)

I live in Manchester, and grew up in its suburbs. Our Gay Village - Canal Street and its surrounding areas - brought me up and out. By today's standards, I was a late queer bloomer. I came out a little bit, at age 17, and fully by age 20. I came out fully thanks to the safety and support of my university LGBT society (Edge Hill 2002-2005). I was a self-labelled banner waving dyke. My first trip to Manchester's Gay Village was in 2003. I had, of course, seen the marvels and mystery of this magic street on television in the '90s. But actually visiting for the first time, my eyes were opened. I'd never seen so many LGBT people in my life! Later that year, I attended EuroPride and my love for the area was cemented.

I have learned about its history and significance to the LGBT community. It was the scene of the Aids massacre in the '80s, it was the hope of the community at a time when you would be gay bashed if you went anywhere else; and it was home to many protests against discrimination and hatred (and still is). In the winding back streets of the Gay Village (known to those in the know as simply "The Village"), you'll find the remnants of this once booming community - support services, a local football team, the Gay Gordons, all coming together.

Recently I have seen so much outrage and horror about the developments within the boundaries of Whitworth Street, Portland Street, Princess Street and Minshull Street. There has been talk of residential property for - shock horror - families set to destabilise the status quo. But I have to ask a question of the LGBT community - what is it that you want? A non-viable ghetto where business people can’t keep their businesses open? Because that’s what we have now (it would appear). The number of businesses that have shut down in the past 10-15 years is reaching double figures - Bar Risa (standing empty for over 10 years), Essential (empty for 4 years), Villaggio, Eden (now Delicatezzi), two short lived restaurants in the space next to Richmond Tea Rooms, Sackville Lounge, Bandit (now replaced with the fantastic No.1 Canal Street), Coyotes.

I would love to see the area become more like the Castro district in San Francisco - with shopping, living, and entertainment - maybe even a bakery! Right now it is only clubs, bars and hotels, along with LGBT charities. I support The Village as much as I can - I run a monthly karaoke night, I sometimes work on the doors, I occasionally go out drinking, I frequent the restaurants for Sunday Lunch. But I very rarely go 'out out'. Let’s be honest, the current village is catering for a demographic that is on the decline. It's on the decline for good reasons. The kids don’t want to be ghettoised. They want to be out, proud and fierce in the NQ, Deansgate, the suburbs. They don’t have the reverence for the safety of our village because they’ve never needed it - and please remember, this is a good thing!


Everything changes. Gentrification is fucking awful - but so is a 15 year stagnation and decline. Every year it gets harder for the bar owners and business owners to keep running. Overheads are high, custom is spotty. Queer people don’t want to pay to get in anywhere (not even £1). They want their drinks cheap, and their entertainment high quality. They complain if drink prices reflect the prices across Manchester (I pray they never drink in London!)


So what am I trying to say?


Things need to change. Those changes can be positive. But if you really want the Village to stay as it is - then you’re going to have to start using it! Not just once in a while, not just at Pride, not just once a month. You need to spend your money there every week and not elsewhere.
You have a choice of where to spend your money, and if you choose to spend it outside of the Village, then you can't really complain when the city decides that something needs to change, nor when you look around and find are no LGBT people there.


I will end with a conversation I’ve had many times over the years.

“Canal Street is getting too straight” someone will say...


“Babe, if the place was full of Queers right now, there would be no room for other straight people now would there?” I reply.

TheFrustratedPoet
In my real life, I work as a customer services assistant for a telecommunications company. Outside work, I'm married and enjoy writing, political debate, and conversations with my father. I like to fill my time with friends and adventures. I hate having nothing to do (which doesn't happen often). I am a guest host and contributor at The Gay Agenda Podcast, and the founder and host of The Boi Zone Drag King Karaoke.